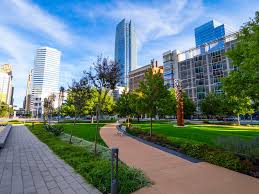 If you’re looking to advertise your business in Oklahoma, there are many factors to consider. What type of ads do you want to run? How much do they cost? Where are you going to reach the most people with your message? You are trying to determine the best value for your advertising dollar, so you don’t blow your budget on something that doesn’t result in increased traffic for your business.

It’s important to concentrate your advertising in places where it will be seen by the most people. The largest city in Oklahoma is Oklahoma City, with a population of over 700,000 people. Tulsa is next with 417,000 residents, and Norman is third with about 131,000 people. These are the best bets for billboards as they will get the most eyeballs on them.

Oklahoma has three interstate highways, I-35, I-40, and I-44. They run north/south, east/west, and diagonally across the state, but all three converge in Oklahoma City, the state capital. Therefore, if you’re considering a billboard placement alongside an interstate to advertise your business, oklahoma city billboards would be your best bet. The high volume of traffic from commuters and travelers across the state will increase the visibility of your business with Oklahoma city billboards giving you that boost.

Oklahoma has several airports, but the two largest are Will Rogers World Airport in Oklahoma City and Tulsa International Airport. Airports are a great location to advertise because of the heavy traffic at those locations. If you are looking to target tourists for your business, it can be wise to place advertisements near airports and other transportation hubs as they will see them upon arrival.

The University of Oklahoma and Oklahoma State University both have popular athletic programs, so billboards near the stadiums in Norman and Stillwater are also valuable to attract a sports fan consumer. In fact, the football teams of those schools are some of the most popular sports teams in the state.

Oklahoma has several television stations, most of which are based in Oklahoma City and Tulsa. The main networks of ABC, NBC, CBS, the CW, and Fox all have affiliates in both of those cities. Whereas Oklahoma City billboards only reach the consumers who are at those locations, television can get your advertisement to those in the rural areas of the state. Television ads get to a large audience, but the drawback is cost. The price of producing a television ad and buying airtime on a network can be prohibitive, but if it works within your company’s budget, it can be great exposure for your business.

Like television, placing an advertisement in the larger Oklahoma newspapers will ensure it reaches a wide audience. The newspapers with the largest circulation are The Oklahoman in Oklahoma City and the Tulsa World. However, if you want to target your advertisement to a smaller community, Oklahoma has many rural newspapers. These will be more economical as well.

Finding the Situation That Works Best for Your Business

Advertising in Oklahoma gives you many options for promoting your business. Oklahoma City billboards along the interstates will reach consumers in the state’s largest city, while airports, sports stadiums, and colleges are other locations to consider as well. Television and newspaper ads can help you reach outside the main population centers, so consider your advertising budget and spend wisely.